Preorder Incentives for A KISS IN THE DARK!


I can not believe A KISS IN THE DARK's release day is only 6 weeks away!

You may have seen my previous post about the preorder incentive I'm running, but since BUSTED's time as a preorder is up (HAPPY 3 WEEK BIRTHDAY, BUSTED!) I've decided to reiterate the giveaway details in a separate post dedicated to KISS.

EVERYONE who preorders A KISS IN THE DARK and emails  proof to gina(dot)ciocca(at)yahoo(dot)com by March 5, 2018 will receive swag: 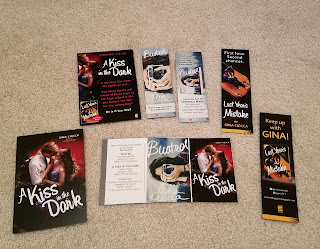 All entries will then go into a drawing for a GRAND PRIZE, the winner of which will be announced on release day - March 6, 2018. 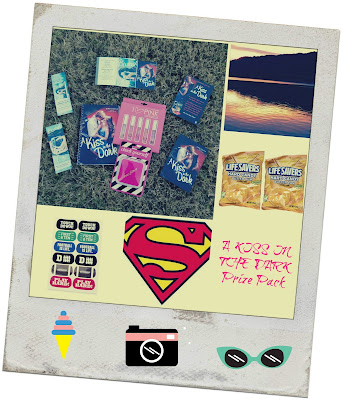 - A custom notebook sporting A KISS IN THE DARK's cover- swag- A #nofilter compact mirror (a nod to the photography aspect of the story)- A set of 5 Color Story lip glosses (in honor of Macy's lip gloss-obsessed best friend, Meredith)- A sunset lake journal (because Macy loves to snap sunset photos of the lake in her neighborhood)- chocolate footballs (not pictured)- Butter Rum Lifesavers (Macy's favorite candy, as we find out on page 53)- A 4-inch Superman decal (in honor of Macy and Ben's favorite superhero)- Football face tattoos (because Macy is a former cheerleader, and "football is no joke in the South.")

So the steps are:
1) Preorder from the site of your choice (including, but not limited to: Amazon, Barnes and Noble, and Target)

3) Sit back and wait for free stuff to arrive in your mailbox.

That's literally it! And while you wait for your swag, you can add KISS to your Goodreads shelf here. You can also spread the word with these copy-and-paste-ready tweets:

Get awesome book swag + the chance to win a grand prize! Preorder A KISS IN THE DARK by @gmc511! https://writersblog-gina.blogspot.com/2018/01/preorder-incentives-for-kiss-in-dark.html

Preorder Incentive #Giveaway for @gmc511's A KISS IN THE DARK! Everyone gets swag + an entry for a grand prize. Details here: https://writersblog-gina.blogspot.com/2018/01/preorder-incentives-for-kiss-in-dark.html 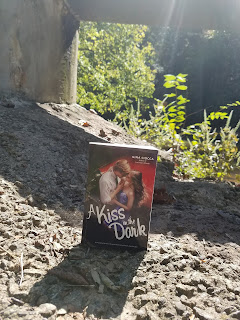 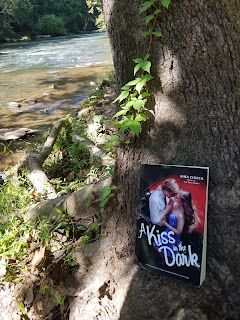 Email ThisBlogThis!Share to TwitterShare to FacebookShare to Pinterest
Labels: A Kiss in the Dark, Giveaways, Simon Pulse

The Story Behind the Story: Happy Release Day to BUSTED

Today is the day! My 2nd book, BUSTED is finally out in the world! 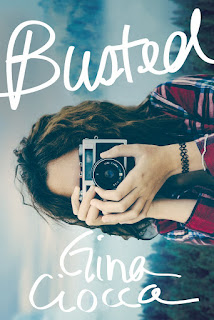 I love this book, y'all. I really love it. And I'm not exaggerating when I say that publication has been a loooong time coming. Those of you in the writing world know that almost nothing happens quickly here, and this book was no exception. Neither was my debut, LAST YEAR'S MISTAKE.

And even though the pub stories of BUSTED and LYM sort of intertwine, BUSTED has it's own unique path to publication, and it's one that I feel is worth sharing. So here goes:

In early 2013, LAST YEAR'S MISTAKE had been on sub for about a year, and hopes for publication were dwindling. If you haven't read LYM's pub story, you can do so here, but this is the abridged version: John (my agent) and I came very close to book deals with two different publishers, but those deals ultimately didn't pan out. The feedback that we seemed to keep getting was that LYM was "too quiet." Editors wanted something with a bigger "hook," and a bolder premise.

So, while I was devastated at the thought of  LYM never making it to a bookshelf, I was determined to write a book that would.

One morning, while driving to my job (I was living in Connecticut and working full time then), the hosts of the radio morning show I listened to on 106.1 were talking about a woman who suspected her boyfriend of cheating, and had hired a private investigator to catch him in the act. Instead, the PI and the boyfriend ended up falling for each other.

I remember thinking, "If I could put a YA spin on THAT, no one would ever call it 'quiet.'" 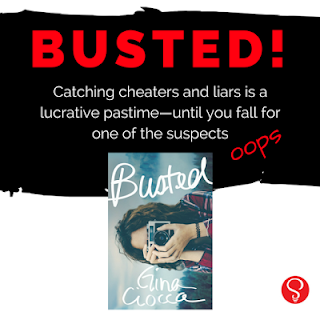 The setting, the story, and the characters began to take shape inside my head. I started to get excited. And then I had a phone call with John to discuss the fate of LYM, and where to go next. I told him about a few ideas I was mulling over. I saved the concept of BUSTED for last. And when I explained it to him, he said, "Write that one."

And so I did. Or I started to, anyway.

In early November of 2012, we had accepted an offer from my husband's job to relocate from Connecticut to Georgia. And THEN, after saying, "It's probably never going to happen" following a 4-year struggle with infertility, I found out I was pregnant. 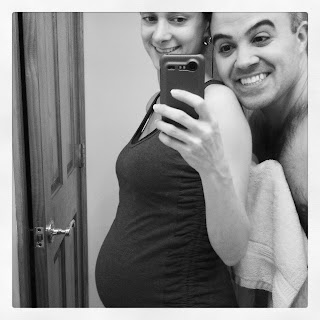 Between the stress of the move and my brain's utter refusal to be creative while I was pregnant, progress on BUSTED stalled.

We drove down to GA in June of 2013. I was 8 months pregnant, swollen, and exhausted. When my son was born, I sunk into a pit of rock-bottom postpartum depression. I honestly thought I would never put words on the page again. I felt useless, worthless, and utterly hopeless.

My mother and sister came down to Georgia and got the ball rolling on my recovery. They helped me with my son, made phone calls to my insurance company on my behalf, and helped me do all the simple things that had become insurmountable tasks since I'd given birth. When they left, my mother-in-law flew down for two weeks.

But the real change in me started to happen when my husband's aunt came to stay with us. As someone who struggled with depression herself, she had taken one look at me following the birth of my son, and knew that something was very wrong. She packed her bags and left her own husband and daughter in Connecticut so that she could live with us in Georgia for five whole weeks. 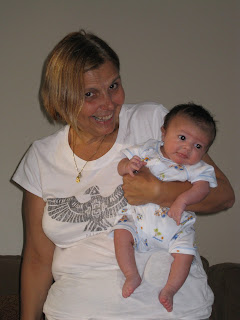 I still get teary-eyed talking about this, because I am in awe that someone could be so selfless. When I'd get up for my son's 6 a.m. feeding, she'd take him and tell me to go back to sleep. During the day, she'd send me up to my office and tell me to write, insisting she had everything under control. And did she ever. She'd walk my fussy baby around the house, singing to him, rocking him, feeding him. She'd bring him outside and walk him around our neighborhood in the stroller. At night she'd make dinner, and I can't even count the number of times I'd go to fold laundry, only to find it already done.

It felt so good to have someone treat my writing like it mattered. I don't think anyone else truly understood how much I needed to find that part of myself again, how I just didn't feel like me when I couldn't create. And with so many stressors off my plate, I was finally able to get back into the head space of Gina the Writer. My creative muscles were stiff and in need of a good stretch, but I sat down in front of my lap top, determined to finish BUSTED.

I didn't get to write THE END during the five weeks while my aunt was here. But I made a ton of progress, and that was good enough.

By February of 2014, BUSTED was more or less done. And then I got the news that LAST YEAR'S MISTAKE was being resurrected for sub by Sara Sargent at Simon Pulse. Thirty-four days later, Pulse offered me a 2-book contract.

With LYM back on the table for publication, BUSTED took a backseat yet again. I put it aside and focused my energy on revising LYM.

In all honesty, I kind of assumed that BUSTED would be my book 2 in the two-book contract with Pulse. When all the hullabaloo of revising and promoting LYM died down, I submitted BUSTED to Pulse.

Needless to say, I was disappointed. But I was determined that BUSTED would find a home somewhere, and I told John I wanted to go on submission with it. So he sent me an edit letter full of revision suggestions to implement first.

And holy smokes, was this revision massive.

Massive, but spot-on, as John's suggestions tend to be. So, I went back to the drawing board. By September of 2015, BUSTED was a brand-new and improved teen spy story, and it finally went on sub to editors.

I'm going to be perfectly honest here - I had no faith that BUSTED would sell. The market seemed to be cooling on contemporary romance, and I was afraid we'd waited too long. Not to mention that after the two-year process that selling LYM had turned into, I certainly wasn't thinking that just one month after going out on sub, I'd get an email from John saying that Annette Pollert-Morgan at Sourcebooks had read and loved BUSTED, and wanted to have a phone conversation with me about it.

But that's exactly what happened. I set up a call with Annette for later that week. I loved her, and she loved my book. I knew that BUSTED had found a home.

And today, five years after this story's journey first began, it's finally where it belongs - on bookshelves, and in the hands of readers. 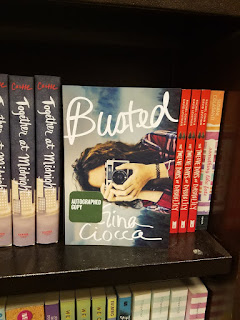 If you'd like to support BUSTED today, here are ways to do so:

- Leave a review on Amazon or Barnes and Noble. The more reviews a book has, the greater its visibility on the site, so please consider sharing the love! This includes cross-posting reviews from Goodreads or your blog.

- Buy the book. Reviews are fantastic, but authors need sales, too. BUSTED can be purchased from Amazon, Target, Barnes and Noble, and IndieBound.
***** And if you purchase it today, I will accept it as a last-minute entry toward my preorder campaign.***** You will receive swag, and your name will be entered in a drawing for a grand prize that will be announced TONIGHT. Details here: https://writersblog-gina.blogspot.com/2017/12/preorder-incentive-campaigns-for-busted.html

- Tweet/Instagram about the book. Two easy, totally free ways to help an author out. Snap a pic of your copy of BUSTED, or a copy in the wild, tag me on Twitter (gmc511) or Instagram (gmciocca), and I will love you forever. 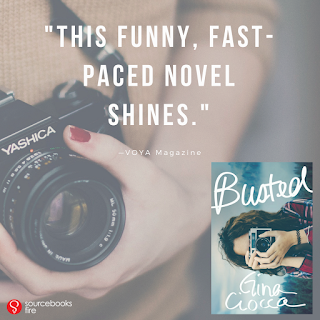 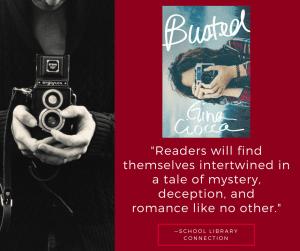 Or, you can use these handy, ready-to-tweet blurbs:

Happy book birthday to @gmc511's BUSTED! Pick up this "tale of mystery, deception, and romance like no other," out today from @SourcebooksFire! https://www.amazon.com/Busted-Gina-Ciocca/dp/1492654299/

Oh, snap! BUSTED is out in the world via @SourcebooksFire ! Order your copy today for the chance to win awesome swag and goodies from @gmc511! https://writersblog-gina.blogspot.com/2017/12/preorder-incentive-campaigns-for-busted.html

- Ask your local library to carry the book. This can usually be done online, no fuss, no muss. Every means of getting books into readers' hands helps.

- Check out the blogs on BUSTED's blog tour, and enter the Rafflecopter giveaway

Lastly, if you've already supported BUSTED in any of these ways, or are planning to, I just want to say thank you. Thank you for caring, thank you for allowing my little stories to be part of your life. You will never know how much this means to me.