Welcome to the 10th(!!) installment of the Kickass Queries Series! Today, my agency sister, author of A MAD, WICKED FOLLY, and all-around lovely person, Sharon Biggs Waller is here to share the query that helped land our agent, John M. Cusick at Greenhouse Literary! 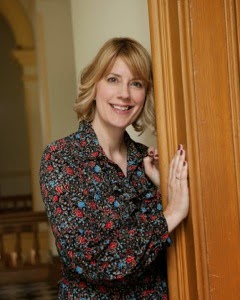 And, if you haven't heard, Sharon just sold a second novel to Leila Sales at Viking!

Go track her down on Twitter and say congratulations!

I’m writing to seek representation for my 95,000 word YA historical. A Mad, Wicked Folly is a tale of classic teen rebellion, with a twist: the rebellious teenager becomes a suffragette.

London,1909. When 17-year-old Victoria Darling poses nude for a forbidden art class, she gets dismissed from her posh French boarding school. Her humiliated parents decide to tame their willful daughter by removing what got her into trouble, her beloved art. Vicky is devastated to lose her dream of becoming an artist, but sees a glimmer of hope when her parents arrange a marriage to Edmund Carrick-Humphrey, a wealthy young man.  Marrying Edmund means she can go to her dream school, London’s Royal College of Art; but more importantly, she can finally break free from her father’s control.

Vicky feels her life is set until she meets a group of militant suffragettes and a handsome young police constable, William Fletcher, who is sympathetic to their cause. When Vicky mistakenly gets arrested in a suffragette riot, she falls into a world where women are willing to sacrifice everything to win the right to vote. Vicky meets fellow artist and American suffragette Lucy Hawkins. Lucy is the woman Vicky wants to become—independent, with a life she’s created.

Will Vicky decide whether to step out into an unknown world where her opinions and individuality matter or stay in a place where she feels safe but her voice is never heard?

A Mad, Wicked Folly looks into an era that has made such a great impact on women’s lives today. The story is filled with the luxury of Edwardian fashion, the exotic world of Pre-Raphaelite art, the delicious taste of forbidden love, and the bravery of young women during the birth of women’s rights.

G: How many manuscripts did you query prior to signing with your agent?

S: I’ve been writing fiction since the early 90s so I have a few novels under my bed, which is where they should stay! I think the count is around four, not including A MAD, WICKED FOLLY.

G: How long did it take to write your query, and what things/steps do you think were most important to make it agent-ready?

S: I wrote so many versions!  I actually took a Writer’s Digest webinar on writing queries, which included a free critique.  I also worked with a freelance editor to get it honed perfectly.  The query is so important to get right and you really have to do your homework.  It’s probably the most important thing you’ll ever write because it represents you as a writer and your story. So for me, spending some money and taking extra time was important.  I was a full-time writer in the magazine and non-fiction book world so I was no stranger to queries.  Still, I wanted that extra help, and it certainly paid off.  I’m a dressage rider and when I was training full-time I took a lesson with a top coach once a week.  It was so important for me to have that coaching to help hone my skills and point out problems, so I applied the same theory to writing.
G: Tell us about your query style – do you approach your entire list of prospectives at once, or query in small batches and revise in between?

S: Small batches.  I try to make sure my story is very solid before I send it out but I might tweak it here and there based on a comment from an agent.  For instance, I decided to rework the beginning because Vicky’s personality wasn’t shining through enough.  I was getting that “not drawn to the character enough” comment.  Then I realized that I had omitted the inciting incident and was just using it as a short flashback.  I wrote it out as a scene, which really showcased Vicky’s strengths and weaknesses, and once I did that I started getting requests for full manuscripts.


G: Now the fun part – what was “the call” like? How did you know your agent was the right person to represent your project?

S: Actually I almost didn’t query John! I had been following him on Twitter for a long time and I had read his novel GIRL PARTS.  I didn’t think my writing was good enough to submit to him and I wasn’t sure a guy would relate to my story.  But late one evening I was scrolling through my Twitter feed and saw that John had mentioned wanting a Downton Abbey type YA.  So I thought, this is a sign!  I asked him if I could submit and he sent me the link. At the time, John’s query process was a bit different.  You filled out an online form, so I had to deconstruct my query and answer a few extra questions.  I actually liked that a lot because I had a chance to pitch my story in a more in-depth way.

I filled out the online form on Friday, he read it on Monday, and signed me on Tuesday!  It was really fun because he was sort of live tweeting how much he loved this particular story.  I didn’t think it was mine, but when he started following me on Twitter and then emailed to ask if we could talk, I realized he had been talking about me.


I was so, so nervous before our phone call.  I get really chatty and kind of breathless on the phone when I’m nervous so I was worried I would sound like a moron, but John was so kind and so complimentary that he really put me at ease.  He did most of the talking so I didn’t have to say much, thankfully!  I decided right then that John was the agent for me, so the next morning I wrote rejection letters to the six agents that were considering my novel still (which was so surreal!).  And then John sold FOLLY to Leila Sales at Viking three months later.


G: Confession: I almost didn't query John, either. Oops! Last question: If you could give one piece of advice to authors seeking publication, what would it be?

S: Make sure you are absolutely ready before you start querying.  It’s hard to know if your manuscript is ready on your own, so I recommend sending it to a freelance editor.  It will cost about $600, depending on your word count, but it’s money well spent.  After all, you are asking the publisher to invest a significant amount of money on your book before they even see a dime of that money, so a little investment on your part is worth it.  By all means, go through your critique partners first, but you really need that professional coach who does not know you and isn’t afraid to tell you the truth.  A bonus to using a freelance editor is that many of them know agents and will often recommend one to you.  It’s a foot in the door.  And find an editor who comes recommended and has been in the industry for a while.

Take rejection on the chin. Everyone gets rejected, and yes, it does sting and it will always sting.  That’s just the nature of this crazy business.  And this is a business.  People must make money and if the market isn’t buying historicals or dystopians, or what have you, right now, wait a little while to submit that story until the market eases a little.  Or try to make yours stand out above the crowd.  Above all, do not reply to rejections.  Try to learn from them, even if you don’t agree.  Maybe you can tweak something and make it even better than it was. Grouse to your friends and family if you must, but never ever make it public.

Thank you for stopping by, and for sharing your work and your insight with us, Sharon! Best of luck with FOLLY, your new deal, and all your writing endeavors!

Sharon lived in the UK for six years, after meeting her own British constable beau and marrying him. She did extensive research on the British suffragettes with the help of the curators of the London Museum—when she wasn’t at her day job as a riding instructor at the Royal Mews in Buckingham Palace. She has three non-fiction books published under her maiden name, Sharon Biggs. You can find her online on Twitter, @sbiggswaller, and at her website, http://sharonbiggswaller.com/ .
Posted by Gina Ciocca at 8:00 AM 1 comment: