You Never Know. No, Really. You Don't: My Pub Story

To say I'm ecstatic is an understatement. Being a published author has been my lifelong goal - I'm pretty sure I came out of the womb looking for a good book and a quiet corner to curl up in with it. It might explain why I screamed so much as an infant. My point: I have waited a LONG time for this, and I am so thrilled that my book found a home with a publisher and an editor who love it as much as I do.

My story is not exactly typical. I found my agent, or maybe it's more accurate to say we found each other, in 2012 when I entered LAST YEAR'S MISTAKE in Brenda Drake's Pitch Madness contest. Naturally, there was much happy dancing.

You can read the interview about it here.

LYM went on sub not long after. And if you think waiting to hear back on a query is torture, let me just tell you that time literally STOPS MOVING when you're waiting to hear whether or not your book is going to become a real book. And a couple of times, it seemed like it just might happen. There were a handful of editors who had nothing but complimentary things to say about the manuscript, but in the end, it didn't pan out.

Talk about heartbreak. I don't even think I need to elaborate.

Fast forward to almost two years later. I had put LAST YEAR'S MISTAKE on the shelf, put it out of my mind, and powered ahead on some new projects. I was literally in the process of putting the finishing touches on my newest when I got an email from John titled An Interesting Email On A Snowy Valentine's Day.

It was interesting, all right.

Sara Sargent, one of the editors who'd read and loved LYM when it was on sub, had emailed him to say she'd been re-reading it on her morning commute and remembering how much she'd enjoyed it, and would he like to re-sub it to her in new position at Simon Pulse?

My reaction was basically this:

She'd remembered my manuscript. Remembered it, and was still thinking about it. And wanted to publish it.

So, LYM came off the shelf for sub resurrection. My intestines went into immediate knots. This was the story of my heart, and I'd long since put it out of my mind. Sure, the occasional wistful memory still crept in every now and again, but for the most part, I'd accepted that LYM would not be my publishing debut, and had even allowed myself to get excited about my other manuscripts instead. Now it was back on the table, and every person I wrung my hands and fretted in front of kept telling me the same thing: don't think about it.

And of course, when you're not supposed to think about something, we all know what happens:

IT IS THE ONLY THING YOU THINK ABOUT.

And for 34 long, agonizing, ENDLESS days, it was all I thought about. No amount of house cleaning or child rearing or new projects helped. I drove myself crazy until I reached a point where I thought, okay, it's been way too long. I guess the answer is no. Again.

Then I got an email from John asking if I had time for a quick phone call, because he had some news to share. And.... 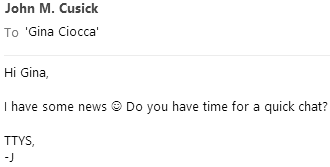 I missed the email because my son had kept me up all night, and when he went down for his afternoon nap, I crashed like a ton of bricks. That's right, I SLEPT THROUGH THE MOST IMPORTANT EMAIL EVER.

Luckily John is persistent, and followed up with a phone call a little while later. AND I SLEPT THROUGH THAT, TOO.

I almost died of a heart attack when I wandered into my kitchen, bleary-eyed and messy-haired and looked at my phone. I wanted to smack myself.

But then I called him back, and finally, FINALLY, I had the news I'd been dying for since, oh, second grade: The folks at Simon Pulse loved LYM as much as Sara did, and they wanted to publish it.

Despite the fact that I was incapable of forming coherent sentences, I wanted to hug John. He's lucky that he didn't deliver the news in person, or it probably would've looked something like this:

Join me in some more happy dancing, won't you?