Wow, you guys. It has been a LOOOONG time since I blogged about bookish happenings. I'm here to fix that with some good news.

Since it's been a while, here's a quick recap of what's happened/happening with my newest YA novels:

In November 2015, I announced that I had sold a YA contemporary called BUSTED to Annette Pollert-Morgan at Sourcebooks.

Since the pub date (now confirmed as 1-2-18) was pretty far out, not much happened for quite some time. But now?

Like the COVER REVEAL (eeeep!) that will take place on 5/25 (one week from today!), at YABooksCentral.com. 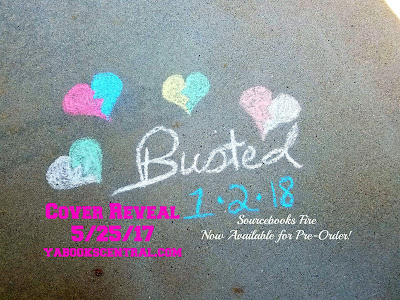 But you don't have to wait for reveal day if you'd like to reserve your copy. BUSTED is already available for pre-order on Amazon: https://www.amazon.com/Busted-Gina-Ciocca/dp/1492654299/ref=sr_1_1?ie=UTF8&qid=1495119460&sr=8-1&keywords=busted+by+gina+ciocca and you can also add it to your Goodreads shelves.

You might also remember that when I announced my book deal for LAST YEAR'S MISTAKE, (LYM, BTW, just got picked up as an audio book that will be available in July. You can pre-order it here.) I noted that it was a 2-book contract. The second book was slated to come out in 2016, but holy crap, did the sophomore curse hit me with a vengeance.

I spent way too much time rewriting a manuscript that just wasn't working. Then my editor left. I was assigned a new one, and we got on the phone to have a chat. She told me the manuscript I'd been toiling over would either have to be rewritten (again), or scrapped. I knew I didn't have it in me to keep forcing a square peg into a round hole. So I came up with a brand-new concept, one that I, and everyone at Pulse, felt good about. Pub date got moved out to 2017 because, well, I had a whole new novel to draft.

Dreaming up the concept proved to be the easy part. Getting the damn thing written was another story. I hired a babysitter so I'd at least have the *time* to write, but the finished product turned out to be 81,000-words of HOT MESS. Luckily, my editor saw hope in that steaming pile of poo, but the pub date was moved out again, this time to 2018.

I didn't talk much about this book, because I was starting to think it would never really happen. But after two rounds of intense editing and re-writing, I handed in a draft that I was proud of. I had a feeling I'd finally gotten it right. After forty-one torturous days of waiting, I found out that my editor agreed.

And that's when I promptly added this to my online profiles: 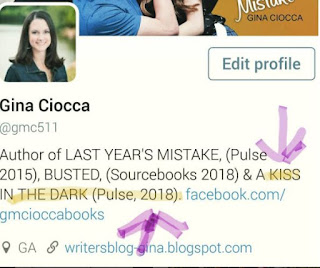 Not only is A KISS IN THE DARK going to be a real book that will go on sale 3/06/18, but on 5/29, YABooksCentral will be revealing its absolutely freaking gorgeous cover.

Hope to see you there!

That about sums it up for bookish updates. What good news do you have to share?
Posted by Gina Ciocca at 11:40 AM No comments: